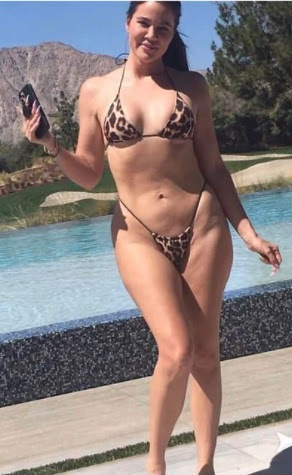 The Kardashian family always ensure their snaps are perfect before sharing them with their millions of fans.

But this week a candid photo of Khloé Kardashian, 36, was leaked online that appears to not have been heavily tweaked or edited with the help of photo-enhancing software – and she was reportedly not happy.

Despite looking stunning in the snap – which was captured in a private setting with her family as they chilled poolside – the mother-of-one reportedly ensured the Kardashian PR team got to work in having the photo taken down from several sites online.

The offering was “posted to social media without permission by mistake by an assistant” and due to Khloé not giving the go-ahead for the snap to be released the family urged for it removed.

According to Page Six, the image that shows Khloe in a leopard print bikini with her hair in a ponytail is authentic and several online pages have been asked to take down the snap as it was unauthorized.

“The colour edited photo was taken of Khloé during a private family gathering and posted to social media without permission by mistake by an assistant,” Tracy Romulus, chief marketing officer for KKW Brands, said in a statement.

“Khloé looks beautiful but it is within the right of the copyright owner to not want an image not intended to be published taken down.”

A source also told the outlet that the photo was taken while the curvy TV star was in the middle of a conversation over the weekend, and “features some edits.”

In recent months the Keeping Up With The Kardashians personality has come under fire from fans for her changing looks.

She recently appeared to fire back at bitter fans who continue to point out how her looks differ from the first series of Keeping Up With The Kardashians aired 14 years ago.

The Good American brand owner could be seen venting about being trolled about her appearances in scenes that recently aired on E!.

During a chat with on-off lover Tristan Thompson, she told: “My soul is at a breaking point in regards to the public thinking they’re allowed to talk about my weight, my face, my personal life .”

“Actually, I don’t want to hear this any more. I’ve always been incredibly open with this show and my life, but I just don’t think I have it in me anymore. It’s not healthy for my spirit,” she added.

In recent weeks, the TV star spoke out about the constant comments she receives about her dramatic change of appearance after a fan of Khloe defended her following an unflattering article headline.