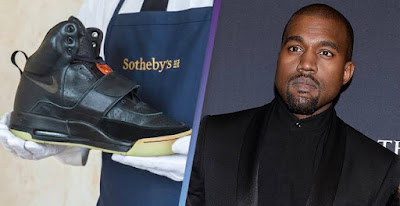 The first Yeezy sneakers ever worn in public by Kanye West are going on sale for over $1 million.

The Nike Air Yeezy 1 Prototypes, which the American rapper debuted at the 50th Annual Grammy Awards in 2008, will be among the most expensive sneakers ever to appear on the market, according to Sotheby’s auction house, which is organizing the sale.

Described in a press release as “one of the most prized and sought-after sneakers in existence,” the shoes will be offered via private sale after going on display in Hong Kong later this month. Sotheby’s did not reveal an exact asking price, though it said it has valued the item “in excess of $1 million.”

While there is no known record for private sneaker sales, a seven-figure price tag would far exceed the current auction record of $615,000, set at Christie’s in May 2020 by a pair of autographed Nike Air Jordan 1s worn by Michael Jordan in 1985.

Put on the market by sneaker collector Ryan Cheng, the prototype Yeezys come in a size 12, West’s shoe size. According to Brahm Wachter, Sotheby’s head of streetwear and modern collectables, the valuation derives from the brand’s cultural impact.

“This pair is critical to the development of the Yeezy franchise, which has become one of the most important sneaker and lifestyle brands in history,” he said over email.