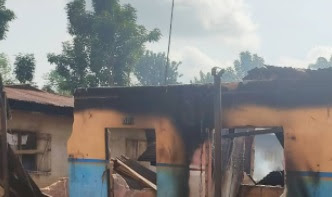 A source at the affected police station told journalists that the gunmen attacked the station late on Wednesday night, killing two Inspectors while all the detainees in the cell were freed before razing down the police station.

When contacted, the Anambra State Police Public Relations Officer, DSP Ikenga Tochukwu, confirmed the incident, adding that the police commissioner has sent a team to the scene of the incident to unravel the circumstances behind the attack.