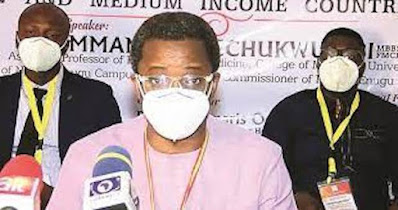 The National Association of Resident Doctors (NARD) has ordered doctors at the Covid-19 isolation centers to join the ongoing nationwide strike.

NARD threatened that failure to do so will attract a fine of N5m.

The body also warned that any branches ignoring the ongoing strike, which started on April 1, would not be able to hold any national position for the next two years.

The threat to impose a N5m fine on errant branches was contained in an internal memo sent out to members by the National Executive Council of the association, the Punch newspaper reported.

The internal memo read in part, “NARD affirms her commitment to the welfare of all members. All members of NARD will be levied the sum of N2, 500 as a strike levy for the smooth prosecution of the industrial action.

“Penalty for any centre that sabotages the industrial action will be payment of a fine of N5m and suspension from holding any NARD national officers committee positions for two years.”

NARD, an association of doctors undergoing residency training, had on April 1 begun a nationwide strike over the government’s failure to pay salaries of house officers and review the N5,000 hazard allowance of doctors.

Last-minute efforts on March 31 by the Federal Government to prevent the strike failed as the doctors shunned an agreement they signed with the government on the grounds that the proposals contained in it were not new.