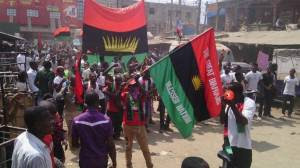 The Lagos State Commissioner of Police, Hakeem Odumosu, has alerted Lagosians of an impending plot of the Indigenous People of Biafra (IPOB) to attack soft targets in the state.

Odumosu, who delivered a paper on ‘Appraisal of Security Situation in Lagos State’, at an ongoing security meeting, said the threat by IPOB has been put on the radar of the Command intelligence gathering and other security services in the State.

The Commissioner said the Command has also taken note of threats by agitators of Oodua Republic and other Yoruba separatist groups.

According to him, 24 of these groups have been identified and being closely monitored.

He added that strategies are being put in place to neutralise their activities.

He, therefore, asked all and sundry to be vigilant at all times and report any suspicious person or movement to security agencies.

“Let us adopt the slogan of ‘when you see something, say something’,” he said.

Another major security challenge being faced by the command, according to the CP, is the use of motorcycle as a means of transportation in the state.

“A combination of factors can be identified as being responsible for the advent of motorcycles as a means of intra-city transportation in Lagos State.

“Foremost amongst these, is the quest of the government to expand the land transportation system and provide employment opportunity to the citizens.

“This made the government to at the onset, grant approval for commercial motorcycle operations in the State with necessary legislation to regulate their activities.

“The government’s good intention of providing additional means of land transportation and creating jobs for the teeming unemployed youths, has been negated by the atrocities being perpetrated by the Okada operators in the State. This include, the use of Okada as a veritable tool to commit crime and get away with it by hoodlums; disrespect to traffic rules and regulations; the Okada operators becoming nuisance and reckless on our roads, resulting into avoidable accidents with attendant consequences on human life,” he said.

The event was attended by Governor Babajide Sanwo-Olu, security chiefs and members of the public.