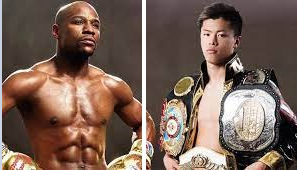 Floyd Mayweather has admitted he earned more than the previously reported £6.5million from his win over Japanese kickboxer Tenshin Nasukawa in 2018.

The exhibition fight was over before the end of Round 1, as the unbeaten professional boxer knocked down the then 20-year-old Nasukawa three times, before his team threw in the towel.

Mayweather is due to face YouTuber Logan Paul later this year, despite his obvious lack of experience.

In a chat with Rob Moore, the 44-year-old gave some insight into the purse.

He said: “When I did an exhibition in Tokyo, Japan. I think 40,000 people showed up for three rounds.

“You know, I told the people that I made $9 million and I admitted.

“But I think actually I made more money than that. I just tell people what I wanted to tell them.”

Gyakie is NOT a virgin – SHS mate BOLDLY confirms

‘Get Your Facts Straight’- Popcaan Shoots Down Collaboration With Shatta Wale