Popular Ghanaian singer, Shatta Wale has taken a swipe at Nigerian artist, Davido after he recently revealed he got himself a Rolls Royce.

Davido had taken to his Instagram account to announce that he just gifted himself his first Rolls Royce as a reward for all his hard work.

“We rise by lifting others but don’t forget to reward yourself. Just chopped my first Rolls Royce!!

“God is good and am forever grateful to y’all,” he wrote.

Reacting, the Ghanaian singer who seems to be at loggerheads with Davido took to his Instagram story to throw shades at him for using his father’s money to show off and always claiming it’s hard work.

Shatta Wale also noted that he doesn’t use his father’s money for hype but rather uses his own hard earned money to do real stuffs.

According to him, “real hustlers are the real money makers.”

We started from the bottom now we are here. I don’t use my father’s money for hype, I use my own money to do my own real stuffs.”

“Real hustlers are the real money makers.Lately this money has been telling me to buy any car of my choice and we will do It because we got shelters not shelter,” he wrote. 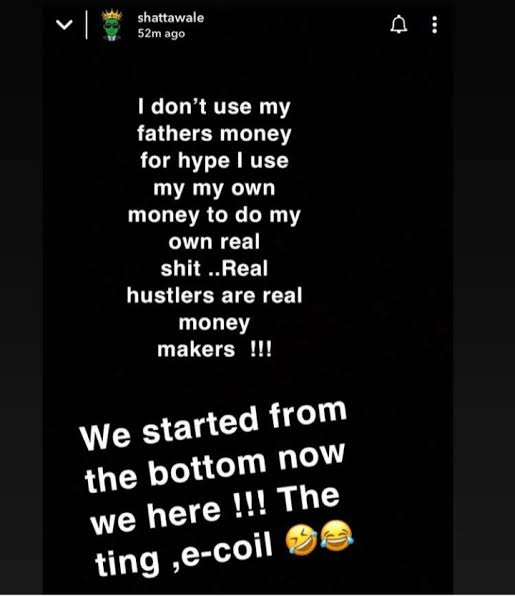 He further noted that even though he hasn’t been signed by a label in America yet, he has been recognized by Beyonce.