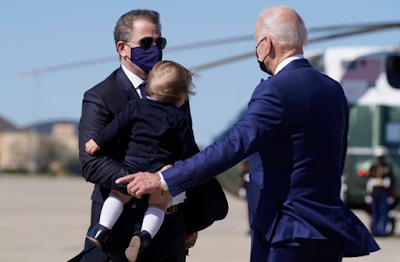 Hunter Biden convinced his father in 2017 to give public approval to his relationship with his brother Beau’s widow, saying it would be best for the grandchildren.

“‘Dad,’ I told him, ‘if people find out, but they think you’re not approving of this, it makes it seem wrong,’ ” Hunter Biden wrote in his book, “Beautiful Things,” about his relationship with Hallie Biden, according to Fox News.

At the time, Joe Biden had recently left the White House after serving two terms as vice president for Barack Obama.

Hunter — who was still married to his estranged wife Kathleen at the time said he and Hallie were “incredibly lucky” that their family supported the unusual liaison after Beau died of cancer in May 2015.

Hunter told his father that his grandchildren would suffer if the former vice president didn’t make a positive statement about the affair.

“‘The kids have to know there’s nothing wrong with this, and the one person who can tell them that is you,’” Hunter pleaded.

That’s when Biden agreed to put out a statement: “We are all lucky that Hunter and Hallie found each other as they were putting their lives together again after such sadness. They have mine and Jill’s full and complete support and we are happy for them.”

Hunter and Hallie later split, and Hunter wrote: “I was madly trying to hold on to a slice of my brother, and I think Hallie was doing the same.”