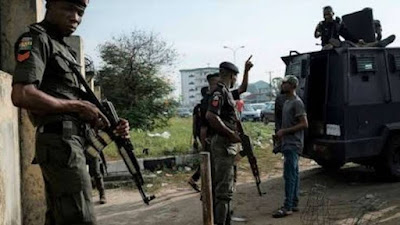 The gunmen also killed a police Inspector, a member of the Anioma Security Watch vigilante and a civilian during the robbery operations.

The hoodlums during the attacks, used dynamites to destroy the security doors of the banking hall and made away with an undisclosed amount of money, Daily Post learnt.

It was learnt that the Delta State Police Command led by CP Ari Muhammed Ali promptly mobilized patrol teams from the State Police Headquarters Asaba to Issele-Uku, led by the DC Operations, DCP Olaleye Faleye, who engaged the hoodlums in a gun duel.

The Acting Police Public Relations Officer, DSP Edafe Bright confirmed the report in a statement signed and made available to Daily Post.

He said, “The hoodlums escaped in two vehicles but were chased and consequently, they abandoned their vehicles and escaped into the bush.

“However, an Inspector of Police, Anioma Security Watch vigilante member and a civilian died, while one of the hoodlums was killed and their vehicles full of blood were recovered.

“Also recovered is one AK 47 rifle breech No. 9558 with empty magazine painted with police color.”

DSP Bright said the Delta State Police Command was appealing to members of the public with useful information that will aid the arrest of the fleeing hoodlums.