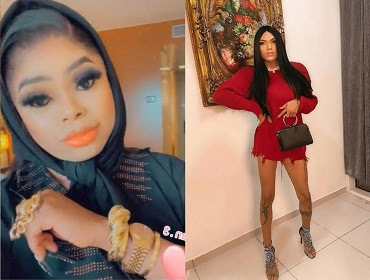 E be like say Goldtiful does not understand what Bob meant when he called himself their ”mummy”.

A crossdresser, Goldtiful has slammed Bobrisky saying he calls himself their ”mummy” but has refused to support any of them. He says Bobrisky supports women and straight people but not people who fall into the category of LGBTQ.

Recall Bob had said he is the mummy of all crossdressers in Nigeria and none of them will get to his level till he retires? Well Goldtiful took it wrongly and implied Bob means he is their mother hen, lol.

But no, Bob was slamming them that he is 100x better and they will never get to his level.

Slamming Bob for not supporting them, Goldtiful wrote; “Bob said she is our mummy, that none of us can be like her until she retires, like seriously? You are not the first crossdresser in Nigeria, you are not and you will never be. Before you, there were other people. So why are you being shady that till you retire none of us will get to your level? You use LGBTQ to cover yourself while you are not representing us well. It’s bad. Calm down you’re not the first. Humble yourself and be nice to people, what will it cost you to be nice to girls and straight people but not to LGBTQ people. Yet you will say you are our mummy”.