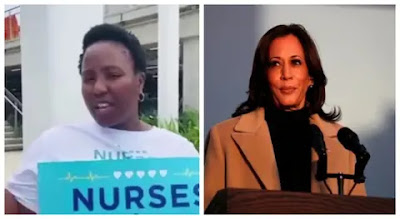 Niviane Petit Phelps, from Miami, allegedly shared the death threats with her husband who is serving time in a Tallahassee prison.

The Secret Service was alerted to the video messages in early March after they were sent over JPay, an application that allows the sharing of media between prisoners and those on the outside. Authorities became aware of the threats after they were revealed by her husband.

According to the federal complaint, the messages “generally depict Phelps complaining and speaking angrily to the camera about her hatred for President Joe Biden and Vice President Kamala Harris, among others”.

The complaint adds: “However, in these videos, Phelps also made statements about killing Vice President Harris.”

According to the Secret Service complaint, in a video sent on 13 February, 39-year-old Ms Phelps said: “Kamala Harris you are going to die. Your days are numbered already. Someone paid me $53,000 just to f*** you up and I’m gonna take the, I’m gonna do the job, okay.”

Footage from the following day shows Ms Phelps saying: “I’m going to the gun range, just for your a**, until you f****** leave the chair.”

In another video, the nurse reportedly said: “I’m going to the gun range… I swear to God, today is your day you’re gonna die. 50 days from today, mark this day down.”

On 20 February, a photo shared with her husband and later obtained by authorities appeared to show Ms Phelps at a gun range.

The Secret Service and detectives from the Miami-Dade Police Department went to Ms Phelps’ home on 3 March to speak with her but she refused to be interviewed, court documents revealed.

The complaint reports that agents received a call from Ms Phelps two days later saying that she had been put on administrative leave by her employer, Jackson Health System.

A Secret Service agent went back to Ms Phelps’ residence on 6 March.

“She was angry at the time about Kamala Harris becoming Vice President but that she is ‘over it now.’ Phelps expressed how she believes Kamala Harris [is] not actually ‘black’ and how during [the] inauguration Kamala Harris disrespectfully put her hand on her clutch purse instead of the bible,” the complaint said.

Ms Phelps, 39, was detained on Thursday. She has been charged with making death threats against VP Harris. She is currently being held at a federal detention center in Miami after a judge believed her to be a “danger to the community,” The Miami Herald reported.