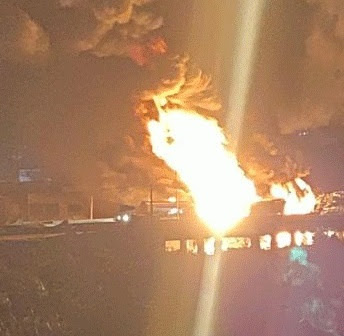 Tragedy struck in the early hours of Saturday, when fire gutted seven vehicles on Otedola Bridge along Lagos-Ibadan Expressway.

It could not be confirmed if there were casualties, but the Director-General, Lagos State Emergency Management Agency, LASEMA, Dr. Femi Oke-Osanyintolu, confirmed the incident.

According to Oke-Osanyintolu, said the fire has been doused by a rescue team and men of Lagos Fire Service. He said: “Mop up is being concluded at about 6a.m. Saturday and recovery effort ongoing.”

Below are images from the scene of the fire incident.

Why I cried after Sanwo-Olu’s house gift –Iya Awero