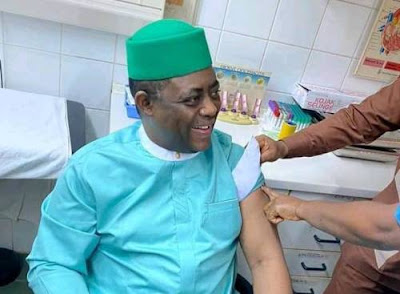 Former aviation minister, Femi Fani-Kayode, has justified receiving the AstraZeneca COVID-19 vaccine despite being critical of the vaccine earlier.

Fani-Kayode, who received the vaccine on Tuesday, was lambasted across social media platforms for his alleged hypocrisy as he had once described the COVID-19 vaccine as ‘evil’.

But taking to his Twitter page on Wednesday, Fani-Kayode clarified why he received the vaccine.

He said it was not ‘Bill Gates Vaccine’ and that Nigerians were not being used as Guinea pigs.

His tweet read, “The COVID-19 vaccines we are taking in Nigeria are not Bill Gates’ vaccines and neither are we being used as Guinea pigs. These are tried and tested, have already been approved and have been administered successfully throughout the world. This is the Oxford Azrazeneca brand.

“There is a world of difference between what we are being given in Nigeria & the exploratory vaccines that @WHO had wanted to test Africans with which we spoke against and resisted last year. Most importantly Bill Gates and his foundation have no connection with Oxford Azrazeneca.

“I would not touch anything Bill Gates with a barge pole for obvious reasons. Mark it.”

Fani-Kayode had in April 2020 described the COVID-19 vaccine as an evil that would “result in millions of deaths”.

He wrote, “I’ve warned about the dangers of the vaccine that will be proposed as the answer to #COVID19. This will result in millions of deaths. Nigeria is trying to pass a law that will make it compulsory to take that vaccine as part of the world depopulation agenda. This is EVIL!#stopncdcbill.”