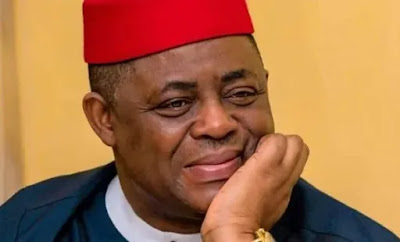 Favour Anthony, a nurse working for Femi Fani-Kayode, Ex-minister of aviation, has quashed allegations of assaults and s.e.x.ual harassment against him by Anthonia Uchenna, his former domestic staff.

Uchenna, who previously worked as a nanny with the ex-minister, had earlier alleged that Fani-Kayode once ordered his bodyguards to strip and flog her.

In a now-viral video, the lady had also claimed that the ex-minister s.e.x.ually assaulted her, adding that he usually threatens to beat her up each time she complained.

The nanny had claimed that other domestic staff of the former minister had similar experiences which forced some of them to resign at the time.

But in her reaction, Anthony asked the public to disregard the allegations, noting that such were aimed at smearing the ex-minister’s reputation.

The family nurse also accused Precious Chikwendu, his principal’s estranged wife, of orchestrating such allegations against Fani-Kayode amid their ongoing face-off.

Anthony claimed that Uchenna was sacked from Fani-Kayode’s residence in 2019 for alleged theft. She also accused Uchenna of conniving with Chikwendu and five other former domestic staff against Fani-Kayode.

“My name is Pastor Favour Anthony, I am the Head nurse of Chief Fani-Kayode. I have been working with him and the children for four years, it has been brought to my attention that one Anthonia who was sacked in 2019 for stealing, has gone to the press and made a video in which she has told many lies against chief Fani-Kayode,” she said.

“Antonia is a liar and desperate for money and precious is using her, she claimed she was been owed salary this is not true, because she has signed for every salary that was her due and we have evidence of it, am the one in charge of it so I know, the staff are paid very well and they are paid on time, and chief Fani-Kayode never owes salary.

“I am surprised, that anybody or newspaper will publish this kind of thing, there are over 55 people working in chief Fani-Kayode House and there all ready to tell the truth and how precious Chikwendu was not just to the staff but also to the children and how she often beat them all.”

The family nurse said the fact that Uchenna neither reported the alleged incident to her nor the police since then showed she had an ulterior motive.

She added that about “15 nannies and nurses work under me and not one of them has ever complained about chief Fani-Kayode.”

Fani-Kayode and Chikwendu have been in a heated tussle for the custody of their four children since their marriage of seven years collapsed last year.

The former beauty queen had earlier alleged that Fani-Kayode abused her on numerous occasions while they were still together — a claim he dismissed.

“I’ve endured too much betrayal” – Saweetie confirms split from Quavo