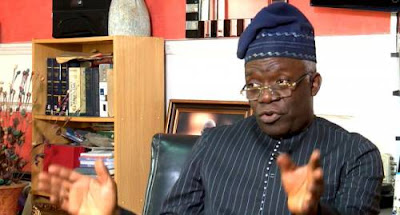 Human rights lawyer, Femi Falana, has raised an alarm over alleged plans by the President Muhammadu Buhari-led government to sell a litre of fuel at N500 before the end of the year.

Falana spoke at the weekend in Abuja during a two-day conference of the People’s Alternative Political Parties Summit titled, “A New Nigeria Is Possible”.

The legal practitioner, who delivered the keynote address at the summit, highlighted the President’s past comparison of the prices of fuel in Nigeria and neighbouring countries.

The Senior Advocate of Nigeria accused the government of being economical with the truth on subsidy removal.

He said the government can no longer be trusted after the announcement of full deregulation of fuel in 2020 which led to the sale of fuel at N168 per litre.

Falana said, “Last September, this same government announced that following the full deregulation, fuel was going to be sold at N168 per litre. Today, we are being told that there will be full deregulation again which will raise the price to N230 per litre.

“(But) Let me predict here that if care is not taken, the government intends to sell fuel at N500 per litre before the end of this year.”

He accused the government of destroying the economy and devaluing the naira through the dollar-based economic system being run by Buhari’s regime.

According to him, the summit is aimed at challenging the worsening security situation, devaluation of national currencies, mass unemployment, and increasing lack of good governance.

He added that a new Nigeria has to be founded on the platform of social justice and there was the need to collaborate with like-minded progressive forces and reposition Nigerians to take back power.

He said, “We want to take Nigeria back from the soiled hands of political buccaneers and that is the essence of the meeting.

“That is why we believe that a new Nigeria is possible that will be run and managed by the Nigerian people and not by alien forces of destruction.”

Falana said Nigeria can be run based on people-oriented programmes and policies instead of neoliberal policies of the Buhari government dictated by the World Bank and International Monetary Fund (IMF).

He added that the mismanagement of the economy by imperialist forces and their local collaborators has continued to increase poverty in the country despite the nation’s enormous resources.

Barack Obama mourns grandmother, dedicates a post to her