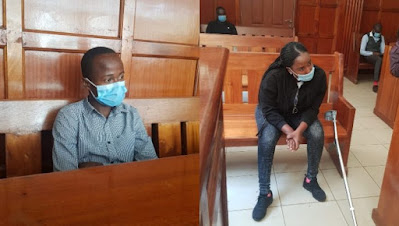 A 20-year-old woman has narrated to a Nairobi court how her boyfriend, whom she met on Facebook, allegedly threw her from the 12th floor of a building while they were drinking together on their first date.

As the two were imbibing an alcoholic drink, Eunice said she rebuffed his s3xual advances, angering him leading to the fight that saw her being thrown from a window on the 12th floor of the Ambank House.

Eunice, who spent two months at Kenyatta National Hospital (KNH), told the court that on September 13, 2020, she travelled from her Karura home in Kiambu County to Nairobi’s CBD to meet her new boyfriend whom she met on Facebook.

She had told her mother that the was going to meet her boyfriend in Nairobi.

When she arrived, Eunice told the court that she informed Moses of her arrival in the city centre. He told her to head to the Ambank House where his office is situated, she said.

She said Moses found her at the Ambank House’s reception and took her to the 12th floor where they spent time together and later decided to go out for lunch.

The two, she said, went to Simbiza Hotel where they bought two pieces of chicken and chips and then proceeded to Naivas Supermarket on Moi Avenue where they purchased an alcoholic drink, the 750ml Captain Morgan, and soda.

They then returned to Ambank House where they enjoyed their meal and washed it down with the whisky.

Eunice told the magistrate that the they drunk until 7.30 pm when she decided to leave but to her surprise, her boyfriend did not like the idea. She said he wanted her to spent the night with him.

An argument quickly ensued that led to a fight, she said.

During the fight, Eunice said Moses threw her through a window on 12th floor and she landed heavily on the 9th floor..

She suffered serious pelvic injuries and was taken to KNH for treatment and the matter was reported to the authorities.

Moses was charged with one count of causing grevious bodily harm for the incident that occurred on September 13, 2020.

On Monday, March 22, 2021, Eunice’s father testifying in court, said that he received a phone call from his daughter while screaming in pain that someone wanted to throw her off a building.

He told the court that when he arrived at the Central Police Station to report the matter, a security guard had already reported the incident.

The police helped him take his daughter to the hospital, he said.