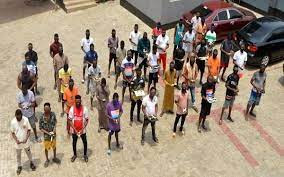 Items recovered from them include 18 cars, mobile phones, laptops and several incriminating documents.

Similarly, 34 men were arrested in Owo, headquarters of the Owo Local Government Area of Ondo State, for Internet-related fraud.

It was gathered that operatives of the anti-graft agency stormed the community on Wednesday and arrested the suspects, who were codenamed ‘Erinle’, following a tip-off.

It was gathered that the suspects were taken to the Benin, Edo State office of the agency for investigation.

Some of the items recovered from the suspects include nine exotic cars, laptops, mobile phones, documents and identity cards.

Uwujaren said investigation into the matter had begun after which the suspects would be charged.