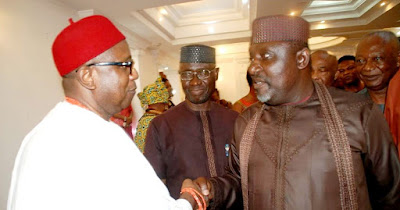 Former Imo Governor, Rochas Okorocha and the Obi of Obinugwu, Eze Cletus Ilomuanya, clashed on Sunday aboard an Air Peace flight to Abuja.

The traditional ruler confronted Okorocha, the Imo West Senator, who was seated next to him.

Daily Post gathered that Ilomuanya hit the politician with his stick in the heat of the argument.

The airline crew, led by the captain, had to re-seat Okorocha to forestall a physical fight.

Ilomuanya was said to have warned the lawmaker to stay away from Orlu, Imo’s second-largest city after Owerri, the state capital.

There are insinuations that the anger of the monarch may not be unconnected with his dethronement as the Imo Council of Traditional Rulers Chairman by Okorocha.

Ilomunaya was removed in 2011 shortly after Okorocha assumed office as the governor.

After Being Shunned By The Man Who Impregnated Her, Woman Kills Her One-Month-Old Baby