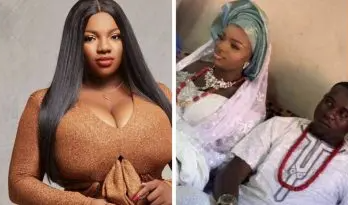 Big Brother Naija’s ex-housemate, Dorathy Bachor has reacted to the news that she got married after a photo of a bride was mistaken for hers.

The photo of the bride seated next to her groom quickly went viral as many thought she was ex-reality star, Dorathy,

Fans tagged her with the photo, asking her to confirm the news, but she kept mute.

She however answered another fan who went under her page on Instagram to ask if the bride was her, and she said no. She then urged fans to stop tagging her in the photo, saying the bride in the picture isn’t her.

So now you know, Dorathy didn’t get married.