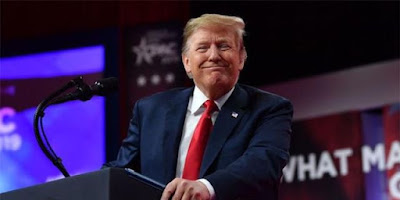 Donald Trump is back online.

The former president and first lady, Melania Trump, have launched a website to serve their personal offices.

The website, 45office.com, comes after Trump’s ban from social media sites in the aftermath of the January Capitol insurrection.

The site features a lengthy biography for the former president that starts, “Donald J. Trump launched the most extraordinary political movement in history, dethroning political dynasties, defeating the Washington Establishment, and becoming the first true outsider elected as President of the United States.”

It also includes more than a dozen pictures of himself, in which he is depicted boarding Air Force One, greeting North Korean leader Kim Jong-Un and, yes, kissing a baby.

Other photos are of the president and Melania Trump dancing at the inaugural ball and at black tie dinners in the White House. The website makes no mention of his two impeachment trials. It does reference how “the coronavirus plague arrived from China,” and says that Trump “acted early and decisively to ban travel from China and Europe, which saved countless lives.”