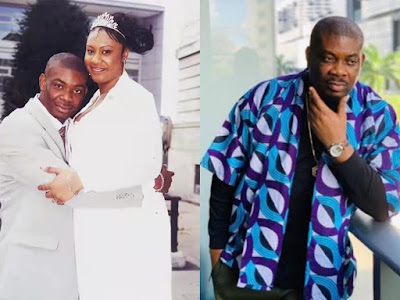 In a new post on social media, award-winning producer and musician, Don Jazzy, has opened up about his marriage and divorce.

In the post on Instagram, Don Jazzy explains that he was married at the age of 20 and got divorced 2 years after.

This revelation comes after his fans have constantly questioned him about his relationship, which he kept private for a very long time.

Don Jazzy has, however, clarified that he is not ready to marry for now, rather, he is married to his music. In his words:

‘I am still very much in love with my music, and I would not want to marry another and fuck it up again. So I am taking my time.’

In a recent interview with Ebuka, he spilled so many information he has not brought up in public.

However, this information about his marriage is one of the most private information to him. His ex-wife also dropped a comment on the post.

A post shared by ITS DON JAZZY AGAIN 😎 (@donjazzy)