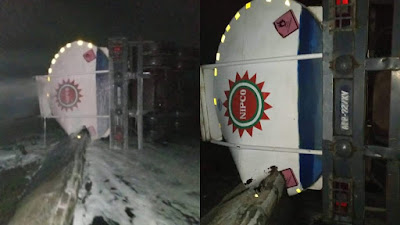 What could have been a huge fire disaster was in the early hours of Saturday averted when a Premium Motor Spirit (PMS) laden NIPCO truck overturned and spilled its content.

The Operations Commander of the Federal Fire Service, Osun Command, Isaac Femi Akinjobi, revealed to Daily Post that the mishap occured at about midnight on Saturday at the November 27th Interchange, Gbongan-Ibadan road, Osogbo.

According to the Operations Commander, the NIPCO truck was descending from the Interchange and heading towards Dele Yes Sir Area of Osogbo when it overturned and the head detached from the rest of the body.

He stated that immediately the accident occurred at the popular interchange early on Saturday morning around 12 am, the operatives of the Federal Fire Service arrived at the scene at 12:30 am after receiving an SOS call.

Akinjobi disclosed that the situation which has since been brought under control recorded no fire incident and officials of the Federal Road Safety Commission (FRSC) have arrived at the accident scene to route traffic towards Ogo-Oluwa.

“No fire outbreak was recorded so far. As at now the officials of the FRSC are on ground and traffic has been diverted to the other side of the dual carriageway towards Ogo-Oluwa.

“We therefore advice all approaching vehicles heading towards the disaster area to proceed with caution.

“The swift intervention of our men ensured that no lives was lost”, he added.

Man Murders His Mom And Buries Her In A Shallow Grave