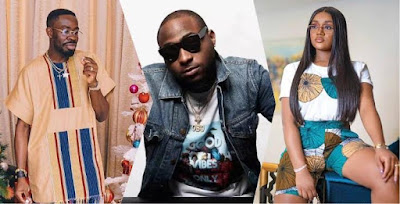 He took to his Instagram page to answer some questions ‘troubling’ his fans about his relationship with his clients, some issues about his personal life and his experience on the job.

A fan then asked him about the relationship with Davido’s estrange girlfriend Chioma and why he thinks might be the reason why Chioma blocked him on Instagram,

“Why did chioma block you??? Y arent you guys friends again“

In his response to the question, Prince revealed this won’t be the first time Chioma is blocking him on social media. He said every time they fight or argue, she stands to block him, but this one seems to be very strange as he knows he is cool her the mother of one. He stated;

”You see why I say I’m afraid of people. Uhm, she’s blocked me before like 2 to 3 times. We argue a lot but I come with brother/sister relationship. She’s legit like a sister to me (when we are not fighting). This particular one, I’m not sure. Let’s hope I find out soon.”

He also went on to revealed how Davido always tries to involve himself with him and Chioma knowing the kind of relationship that exist between as a brother and sister affair.

”The funny thing is whenever we fight and I report to David, he’s like ‘I beg you people shouldn’t involve me in your wahala. Sha find way settle am, she’s your younger sister”