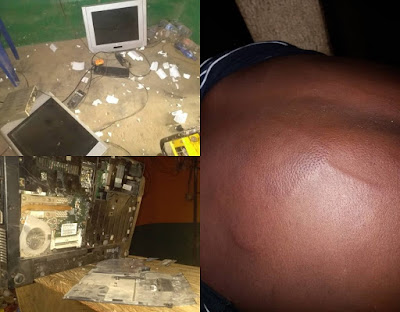 There was palpable tension in Osogbo on Tuesday night as suspected cult group armed with machetes and guns invaded Atelewo area, Kolawole street in Osogbo.

The group, according to a source, around 9am, in their numbers, attacked some residents and destroyed people’s property.

An eyewitness told Daily Post that the suspected cultists came to the area searching for someone called Brown.

“They were looking for a guy. They were shouting ‘Brown’s’ name who is a cult member.”

One of the victims narrated that the miscreants beat him with machete and also carted away N30,000 after destroying the victim’s property.

Recall that Daily Post had reported that cult violence erupted on Saturday morning, claiming the lives of two people.

A 35-year-old man, Akinwale Rotimi, on Saturday, was shot dead at the Kolawole, Arikalamu area of Osogbo.

Consequently, Sogo Owonikoko, 44, also known as Marley and who is suspected to be a member of the Eiye confraternity was hacked down at Alie street, Obate area of Osogbo.

According to the information gathered, the cult clash between the Eiye and Aiye confraternity started about a month ago and has claimed many lives.

Claims of alleged killings at Lekki tollgate not verified - US Report