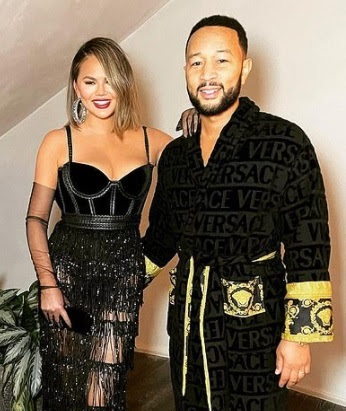 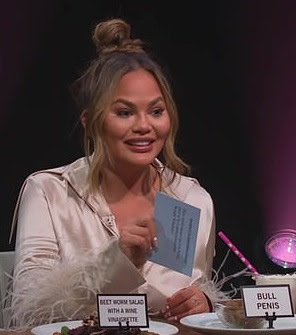 Chrissy Teigen has confessed to having s.e.x with her husband John Legend while they attended the Democratic National Convention.

The model, 35, who had previously said in an interview she and John got frisky at ‘that Obama thing,’ clarified that the former US President didn’t witness their steamy encounter as it had taken place in the toilet.

Chrissy made the cheeky admission after being forced to drink a fish milkshake as part of the hilarious Spill Your Guts challenge on The Late Late Show with James Corden on Thursday night.

For the challenge, Chrissy had to choose between answering an intimate question about her life and eating or drinking something disgusting.

The mother-of-two opted to answer her first two questions, with the second being the strangest place she ever had s.e.x with her husband John, 42.

‘We had some fun days. They’re going to hate this,’ Chrissy said before admitting she wanted to clarify a remark she’d made in a previous interview.

She said: ‘Because one time, at the Grammys, I had said that we had s.e.x at ‘that Obama thing,’ and that came out wrong.

‘Because what I actually meant was, it was ”that Obama thing,” but it wasn’t with them or near them.’

Chrissy then went onto clarify she and John got frisky in the toilet at the DNC ‘a while ago.’

She also quipped she and John had enjoyed a raunchy encounter at the upscale clothing store Fred Segal, ‘right in front of the juice bar.’

While Chrissy was opening to answering her first two questions for the challenge, she chose to eat the disgusting dish for her final question, and was asked to choose an item on her Cravings By Chrissy Teigen website that was not worth buying.

She laughed hysterically as host James held up a reminder of products available on her site, including a $20 brown paper lunch bag, a $32 ‘Endless Pastabilities’ spiral journal; $14 face crystals and $36 popcorn seasoning.

‘Listen, we made a mistake, okay. My team is gonna kill me,’ Chrissy said as she considered answering.

‘Erase all that. I stand by all of our products and I’m going to eat this,’ Chrissy declared.

''If it will kill me, let it kill me'' - Kunle Afolayan says as he takes covid-19 vaccine