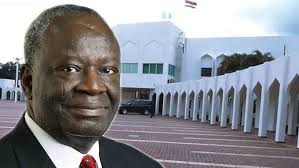 There was a burglary attempt on the residence of the Chief of Staff to the President, Professor Ibrahim Gambari, at the Presidential Villa on Sunday.

Some online media outlets on Monday alleged his residence and that of the Administrative Officer of the State House, Abubakar Maikano, were targeted by suspected armed robbers.

Confirming the report in a couple of tweets on Monday evening, Senior Special Assistant to the President on Media and Publicity, Mallam Garba, said there was indeed an unsuccessful attempt to burgle Gambari’s house, which is located within the Villa area, a short distance away from the State House, Abuja.

On his verified twitter handle, @GarShehu, the presidential spokesman said; “The Chief of Staff, Professor Ibrahim Gambari has confirmed that there “was a foolish attempt” to burgle his residence at 3:00am this morning but it turned out to be unsuccessful.

“Professor Gambari, whose house is on a street next to the Villa has assured that there is nothing to worry about from the incident.

When reached on phone, Shehu confirmed authenticity of the report.

He, however, could not confirm the claim of the attack on Maikano’s home.

He said he was unable to reach the man officially referred to as AO, having called him a couple of times without success.