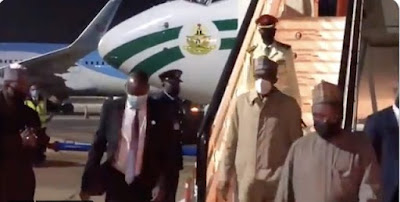 President Muhammadu Buhari has arrived in London, according to a video posted by his New media aide, Bashir Ahmad.

Since the 2-week visit is private, there was noticeably no official UK reception for the Nigerian leader.

There was no red carpet as he stepped out of the Air Force plane into a waiting car.

His PR handlers said he is in the country for a routine medical check-up and will be there till second week of April.

Watch the video below…

Solskjaer refuses to sign player for Man United over haircut