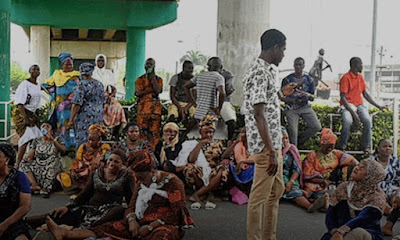 Traders at the Bodija market in Ibadan on Thursday protested the seizure of rice worth millions of naira by the Nigeria Customs Service.

Hundreds of traders took to the streets to protest against what they called the Customs’ invasion of their shops.

The traders accused the agency’s operatives of breaking into their shops at midnight to seize bags of rice. The NCS, it was gathered, raided the market around 1.00 a.m., breaking into shops and warehouses, carting away bags of rice in six trucks.

The placards-carrying rice traders called on the NCS to return the rice and money forcibly taken from their shops as they marched from the market to the state secretariat.

One of the affected traders, Olayemi Oladunni, of Block 1, shop 406, said 100 bags of rice and N2 million cash were taken from her shop.

Also, R O Mosope and E A Iyadunni, with shops were situated at Alao-Akala Shopping Complex, described the NCS operatives’ action as unacceptable.

Addressing the protesters in front of the secretariat at Agodi, Sunday Odukoya, the Executive Assistant to Governor Seyi Makinde on Security Matters, urged the traders to be patient, saying efforts were ongoing to speak with the NCS.

Mr Odukoya appealed to the protesters to desist from taking the law into their own hands.

The protest led to traffic congestion for hours as vehicular and human movements were affected.