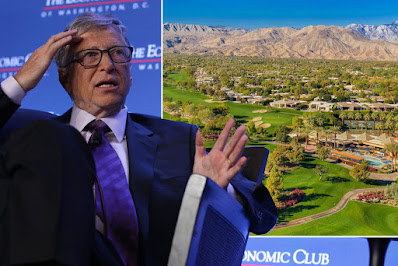 Bill Gates has been hiding from the fallout from his divorce at an ultra-exclusive California golf club for a number of months, according to a source.

An insider said the 65-year-old billionaire Microsoft founder has been holed up at The Vintage Club in Indian Wells, which bills itself as “one of the United States’ most prestigious and ultra-exclusive private country club communities,” a veritable 712-acre oasis of wealth.

A source exclusively told Page Six, “Bill clearly saw this divorce coming for a long time because he’s been there for around three months.”

Bill was this week spotted at The Vintage Club with his 25-year-old daughter Jennifer Gates and her fiancé, Egyptian millionaire Nayel Nassar, according to the Page Six spy.

Gates owns a private home on the property, which also boasts members such as billionaires Charles Koch, Philip Anshultz and Dennis Washington.

It costs $250,000 to join and home prices there range from a mere $2.3 million to $20 million. It has an 85,000-square-foot clubhouse at the epicenter, a host of restaurants, and a luxury spa, and two nationally ranked, 18-hole, Tom Fazio-designed golf courses.

The Microsoft mogul reportedly spent $12.5 million on a massive home in the posh resort community in 1990. The 13,573-square-foot home has six bedrooms and nine bathrooms and sits along a pristinely manicured golf course.