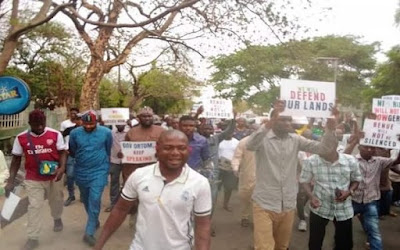 Over 100 youths in Benue, Monday staged a peaceful protest over attempt by suspected herdsmen to assassinate Governor Samuel Ortom.

They matched through major roads in Makurdi, the state capital before heading for the Government House.

Ortom on Saturday morning narrowly escaped death after armed herders reportedly opened fire on his convoy at Tyo-Mu community in the outskirts of Makurdi town, along Makurdi-Gboko road.

A Brand New Benz C300 Burnt To The Ground, Leaving It As Scraps (Video) » GhBase•com™