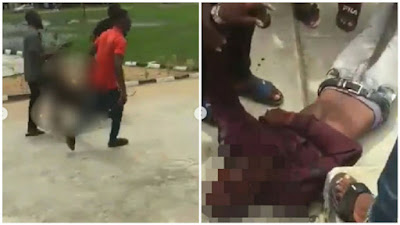 The deceased, James Okunmakpeye, a student of Marketing at the Faculty of Management Science, was allegedly shot in the head at close range yesterday by 11am.

He was standing by the door of his lectures hall.

The incident caused pandemonium in the school as his course mates and lecturers ran for safety.

Some of the female students that witnessed the killing shed tears and lamented the loss of a fellow student to suspected cultists.

Spokesman of the institution Ingezi Idoni who confirmed the development, said the school had contacted security personnel over the matter.

Idoni said the deceased was shot dead during lecture hours.

He stated, “There was a lecturer in the class during the incident. He was shot by the door of the lecture room. He was late to the class and while he was offering reasons for his lateness, someone came from behind and shot him.

“The culprit ran towards the Ogunbiri side of the institution where the perimeter fencing has failed and escaped.”