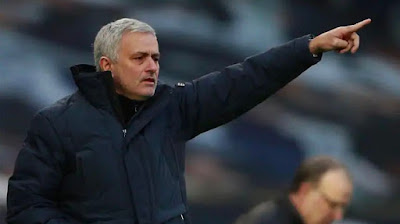 AS Roma have appointed Jose Mourinho as their new head coach ahead of next season.

The club made the announcement on Tuesday, weeks after Mourinho was sacked by Tottenham Hotspurs.

“We are thrilled and delighted to welcome José Mourinho into the AS Roma family,” club president Dan Friedkin and vice-president Ryan Friedkin said as seen on the club’s website.

“A great champion who has won trophies at every level, José will provide tremendous leadership and experience to our ambitious project.

“The appointment of José is a huge step in building a long-term and consistent winning culture throughout the club.”

On his own part, Mourinho revealed that he and Roma shared similar ambitions. He expressed delight at the appointment, stressing that he cannot wait for the start of the coming season.

“Thank you to the Friedkin family for choosing me to lead this great club and to be part of their vision,” Mourinho said.

“After meetings with the ownership and Tiago Pinto, I immediately understood the full extent of their ambitions for AS Roma. It is the same ambition and drive that has always motivated me and together we want to build a winning project over the upcoming years.

“The incredible passion of the Roma fans convinced me to accept the job and I cannot wait to start next season.

“In the meantime, I wish Paulo Fonseca all the best and I hope the media appreciate that I will only speak further in due course. Daje Roma!”

His appointment comes hours after Roma announced that their head coach Paulo Fonseca will leave at the end of the season.

A statement on the club’s website read, “On behalf of everyone at AS Roma, we would like to thank Paulo Fonseca for his hard work and leadership over the past two years,” said club chairman Dan Friedkin.

“Paulo guided the team through many challenges, including the Covid pandemic and a change of ownership, and did so with selfless integrity and great character.

“We wish him all the best for his future endeavours and know that he will be a great asset wherever he goes.”

Tiago Pinto, the club’s General Manager (Football), added: “I would like to thank Paulo for all his work for the club over the last two seasons.

“Even if the results have not always been there on the pitch, we know that he has left many positive elements that will continue to help our development – like the many talented and young players he has encouraged and improved, and our progress in the Europa League this season.

“We are building a path to success at Roma, and Paulo has played an important role in that.”