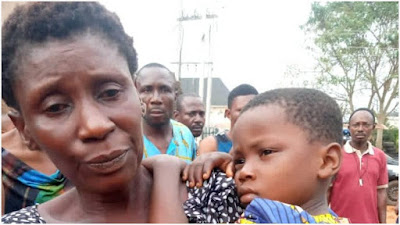 An angry mob has killed a 35 years old man after he abducted and tried to make away with a four years old child in the Okpuno area of Awka, Anambra State.

Daily Post gathered that the man, who was identified as Yusuf, from Shagamu had snatched the little boy and tried to make away with him, but was spotted by residents to the area, who promptly descended on him.

The four years old boy, whose name was given as Chukwuka Sunday was also rescued and reunited with his mother, who is said to be a resident of the area.

The Anambra State Police Command Spokesperson, DSP Toochukwu Ikenga confirmed the incident, saying that the kidnapper was rescued and taken to hospital, but was confirmed dead.

He said, “Following credible information received on 27th March 2021 at about 08:30hrs, a young man, suspected to have stolen a child, was being mobbed along Umoudu Okpuno; Operatives of Anambra State Command attached “B” Division Awka, raced to the scene.

“The operatives rescued and reunited the four (4) years old child, named Chukwuka Sunday (m) with the mother, while the suspect, simply identified as Yusuf (m) of about 35 years of age and from Shagamu, Ogun State, was also rescued from the angry mob and rushed to the hospital, where he was confirmed dead.”

He said the Commissioner of Police, CP MB Kuryas has directed the conduct of a thorough investigation into the circumstances leading to the death of the suspected child trafficker.

He said the CP enjoined residents to promptly submit arrested criminal suspects to the Police for proper investigation and prosecution, rather than engaging in mob action.