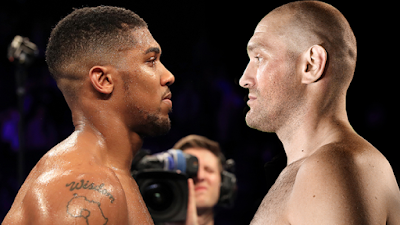 Boxing promoter and chairman of Matchroom Sports, Eddie Hearn, has announced that the highly anticipated fight between Anthony Joshua and Tyson Fury will take place in Saudi Arabia on either dates of August 7th or 14th.

The fight which would determine the undisputed world of boxing champion has four belts at stake.

The unification bout will see Anthony Joshua risk his four belts while Tyson Fury will also be putting his unbeaten record with the WBA belt at stake.

Eddie Hearn told Skysports in an interview that the date of the Tokyo Olympics will influence the Tyson-Fury fight to avoid clashing with important events at the Olympics.

The match will produce the first Undisputed Heavyweight Champion in 21 years.

The British-Nigerian boxing champion Joshua has a standing record of 24 wins and just one loss with 22 being knockouts while Tyson Fury has 30 wins with 21 being knockouts.