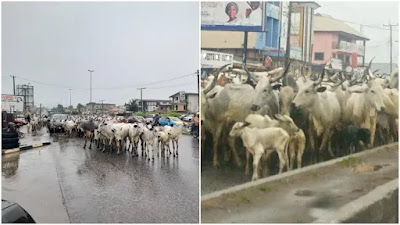 The seizure of the cows was coming about two days when the security outfit arrested 100 cows along the busy Akure/Ilesa highway while the herders took to their heels.

With the arrest of the 300 cows by the men of the Amotekun Corps for flouting the state government directives on open grazing and use of underage herders, the total number of cows seized between Sunday and Tuesday was in the range of over 400.

During the arrest of the cows, there was heavy vehicular traffic along the Oyemekun-Oba Adesida road up to Alagbaka on Tuesday morning as men of the Ondo Amotekun Corps conveyed 300 seized cows to their headquarters in Alagbaka while it was raining heavily.

The cows were said to have been seized at the outskirts of Akure, the state capital.

What caused the vehicular traffic was that most times cows would refuse to move and congregate at a place until they were whipped by the Amotekun operatives.

Popular cleric, Akeugbagold withdraws suits against his workers who allegedly kidnapped his twins