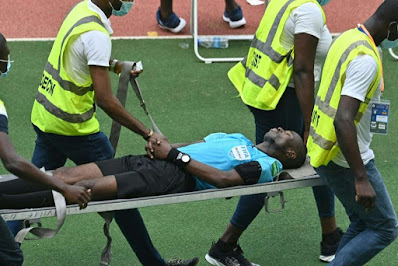 Ghanaian referee, Charles Bulu, collapsed while officiating the African Cup of Nations qualifier between Ivory Coast and Ethiopia on Tuesday in Abidjan.

The referee collapsed in the 80th minute of the encounter forcing the game to be called off with the home side leading 3-1.

The game descended into chaos on Tuesday as footage showed Bulu being helped by players having seemingly felt unwell.

Bulu is seen in the video being slowly walked by the players towards medical staff before closing his eyes and falling to the ground.

The ref received medical attention on the pitch before being stretchered off, and taken to a local hospital for examination and proper treatment.

Bulu was called in to officiate the match after the referee who was originally assigned to manage the game tested positive for COVID-19.

However, the fourth official who took Bulu’s place was unable to take charge for the remainder of the match because he is Ivorian – and could have been accused of bias towards the hosts.

Following the 0-0 draw played out by Madagascar and Niger Republic in the group’s other game, both Ivory Coast and Ethiopia qualified for the finals next January.