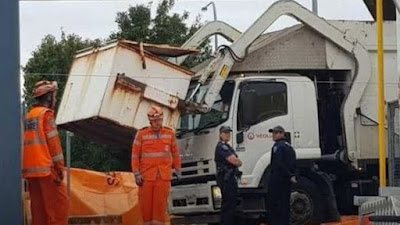 A 13-year-old schoolboy has been crushed to death by a rubbish lorry after he and two pals fell asleep in an industrial bin in Australia.

An 11-year-old boy suffered serious injuries when the truck began emptying the container while the third boy, 12, managed to escape unharmed and alert the driver.

The tragedy happened at 5.20am local time on Tuesday in Port Lincoln on South Australia’s west coast, the Mail Online reports.

Superintendent Paul Bahr told reporters that afternoon that the surviving boys are “traumatised” and that it will take time to get a detailed version of events from them.

“I think it’s fair to say the boys had somewhere to stay. I don’t think it would be fair to classify them as homeless.”

The truck driver did not realise the children, who are from Port Lincoln, were in the bin at the time and was said to be “extremely shaken by the incident”.

Port Lincoln Mayor Brad Flaherty described the accident as a tragedy. He said: “It’s a terrible, terrible incident that will have an awful impact on the community as a whole and the families involved.

“Our heartfelt thoughts are with the families and community members affected.”